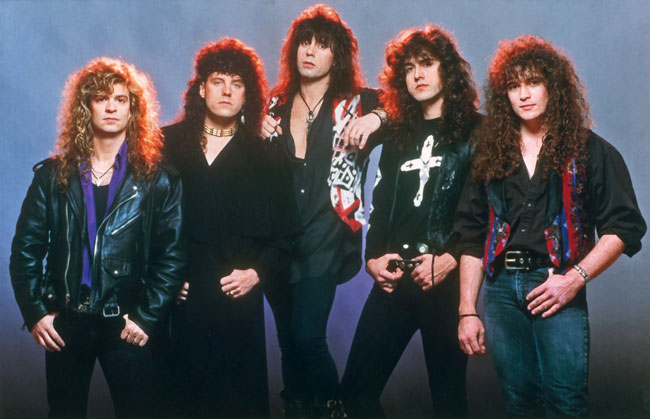 RED DAWN is the kind of band that comes along only once in a great while. A band with impact, punch and power, but also melody, style and taste. Five rock and roll veterans with a chemistry that shines through on every recorded cut...and in every note and nuance of their stage assault.

At the center of the storm is keyboardist/producer David Rosenthal, a Berklee-trained musician who came to prominence as a member of the influential supergroup, Rainbow. David contributed to Rainbow's last three albums, helping to shape such hits as "Stone Cold", and "Street of Dreams". Not one to stand still, David moved on to a series of tours with the likes of Cyndi Lauper, Robert Palmer, Little Steven, and is currently touring with Billy Joel on the "River of Dreams" World Tour. This mammoth tour also includes 33 sold-out stadium show featuring Billy Joel and Elton John together. Additionally, David racked up an impressive string of studio credits, including work on Steve Vai's "Passion and Warfare", and Whitesnake's "Slip of the Tongue".

As David spent more time in recording studios, he developed a strong interest in the process of music production. Eventually, this interest spawned a project involving a select group of players - who formed the basis for what would become RED DAWN.

David's notoriety in Japan drew early support from Tack Takahashi, who as Director of Tours for UDO Artists (Japan's largest music promoter), had booked David's previous tours of Japan. With Tack's assistance, David Rosenthal landed a Japanese deal with EMI/Toshiba. David hand-picked his band and produced their first LP "Never Say Surrender." The album has been very well received in Japan, and has already received international acclaim in the press. "Never Say Surrender" was recently released in the UK on the NOW & THEN record label, and is again enjoying unprecedented critical acclaim along with brisk sales.

Besides David Rosenthal, RED DAWN features the talents of four other experienced musicians: Larry Baud, an extraordinary vocal discovery, has been a veteran of the Mid-Atlantic club circuit...Tristan Avakian, with his remarkable technique and melodic feel, could be the guitar hero of the '90's...Bassist Greg Smith has been the rock-solid bottom for such luminaries as Alice Cooper and Vinnie Moore...and Chuck Bürgi, also a former member of Rainbow, has additionally provided the beat behind Hall and Oates, Meatloaf, Blue Oyster Cult and Brand X. 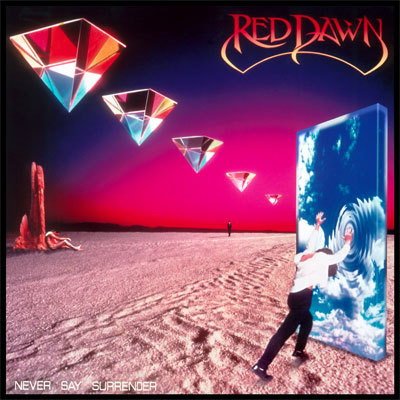 After leaving Rainbow in the mid-80s, keyboard player David Rosenthal began writing songs with a budding AOR singer named Mitch Malloy. The sessions produced some fantastic material, but circumstances changed and recording sessions for a proposed album were abandoned. Malloy subsequently recorded a solo album (a self-titled release, it was soon considered a melodic rock essential) and Rosenthal set about forming a permanent band. The new band, Red Dawn, saw David drafting in a familiar face in drummer Chuck Burgi – a trusted friend from his Rainbow days – and ex-USA vocalist Larry Baud. For those who heard it, their one and only album, 1993’s ‘Never Say Surrender’ would ultimately change the landscape of 90s melodic rock forever.

Originally given a Japanese only distribution, the album was subsequently picked up by UK independent label Now & Then Records who’d already shown great faith in the melodic rock sphere by releasing superb albums by Crown of Thorns, Cannata and Marcie Free. By the time of ‘Never Say Surrender’s UK release, the label had over a dozen releases to their credit, at least five of which set a standard high enough to potentially silence the whiners who claimed that grunge had killed all of their favourite music [decades on, though, they were still whining…], but the Red Dawn disc trumped the lot.

In melodic rock terms, ‘Never Say Surrender’ is almost perfect. The sheer professionalism of the recording is obvious right from the off, with ‘Flyin’ High’ tearing out of the gate with a huge pompy keyboard widdle that could be Greg Giuffria in his House of Lords days, followed by a solid drum part and a busy lead guitar, before settling into a very punchy rock arrangement that sounds like Survivor circa ‘Too Hot To Sleep’ meeting with something akin to Mitch Malloy’s solo LP. Baud’s vocal has a slightly scratchy delivery, but given a couple of lines to attune, it’s obvious he’s more than up to the job, especially given the uptempo style of the track. Chorus wise, this is huge: it’s lyrically familiar without too much of a heavy cliché and his great keyboard flourishes accenting a selection of harmony vocals, but it’s the instrumental breaks that make the track fly…almost literally. Taking their time to show off his prowess, Rosenthal fills several bars with a solo that revisits the pomp of the intro, this time with the kind of flair that would have suited Rainbow in their ‘Bent Out of Shape’ years, while guitarist Tristan Avakian indulges in some great tapping before dropping into a very melodic solo that really bends the strings. The album includes more melodic works than this, but in terms of grabbing the attention, the band have all the bases covered here.

For a bit less showboating and a much bigger AOR thrill, ‘I’ll Be There’ is one of the LP’s essentials. Tapping into their softer side, the track is best described as one part Survivor, one part Danger Danger, one part Mitch Malloy and six parts Desmond Child. As good as anything recorded during the genre’s 1984-89 heyday, this is a guaranteed mood lifter; a rock/pop ray of sunshine, Tristan’s cleaner guitar tones ring through almost every bar and his featured solo is a master class in how to fill a small space with maximum effect whilst holding on to a very strong melody. An upfront bass adds a fluid melodicism that’s in contrast to the opener and the huge backing vocals pull greatness from a hook you’ll only need to hear once to feel like you’ve known it forever. Perhaps it’s due to those early sessions involving Mitch Malloy, but this is especially close to parts of his debut. In short, it’s one of the best melodic rock tracks you’ll ever hear…period.

… [‘Never Say Surrender’] sounded like a genre classic upon release and still sounds bloody superb. Anyone claiming that melodic rock was dead by the mid 90s is clearly (a) a bona fide idiot and (b) didn’t hear this LP. It’s an album that seems utterly undiminished by time…and a thoughtful balance between melodic hard rockers, purer AOR and a few moments of real indulgence makes it an album that lovers of melodic hooks should not be without.

PREVIOUSLY ONLY available in Japan, 'Never Say Surrender' is a record that requires immediate purchase if you're into Night Ranger and bands of that ilk. Red Dawn are capable of achieving stuff as on the ball as that with relative ease.

Red Dawn only stumble with the big ballad 'Take These Chains'. But 'Never Say Surrender', at the end of the day, is a minor masterpiece. - Dave Reynolds PREVIOUSLY ONLY available in Japan, 'Never Say Surrender' is a record that requires immediate purchase if you're into Night Ranger and bands of that ilk. Red Dawn are capable of achieving stuff as on the ball as that with relative ease.

Red Dawn only stumble with the big ballad 'Take These Chains'. But 'Never Say Surrender', at the end of the day, is a minor masterpiece. - Dave Reynolds

Although released as an import for quite some time, Red Dawn is really just now starting to make a name for themselves in the States. The band is comprised of former Rainbow keyboardist David Rosenthal and drummer Chuck Bürgi, bassist Greg Smith (Alice/Vinnie Moore), vocalist Larry Baud, and new guitar extraodinnaire Tristan Avakian. Their debut release Never Say Surrender has received numerous praises overseas in mags such as Burrn and Rock Report. Produced by Rosenthal himself, the album is packed with plenty of power, melody, and superb musicianship. If you like bands such as House Of Lords and Asia (believe it or not, there is still a market for this stuff) these guys are for you. - AM

It has been a long time coming but Mark Ashton at Now & Then has finally come up with a beauty. Originally released in Japan over a year ago this, the debut album from Red Dawn is very good indeed. Fans of "I'll Be There" the stand-out track on the Dream in Colour sampler will be quite happy as album opener "Flyin' High" kicks in with a real statement of intent. Ex U.S.A. vocalist Larry Baud catches the eye with his fine wide ranging performance. There is something for everyone here as keyboard player and Red Dawn main man David Rosenthal (ex Rainbow) leads his troops through a variety of material, from the high pomp of "Liar" and "Dangerous Child" to the sublime ballad "Take These Chains" all which highlight Tristan Avakian's sharp but melodic guitar lines.

A terrific debut and to think the band originally featured Mitch Malloy, one time great white hope of all things AOR. Career direction is a very funny thing. - Dave Vousden