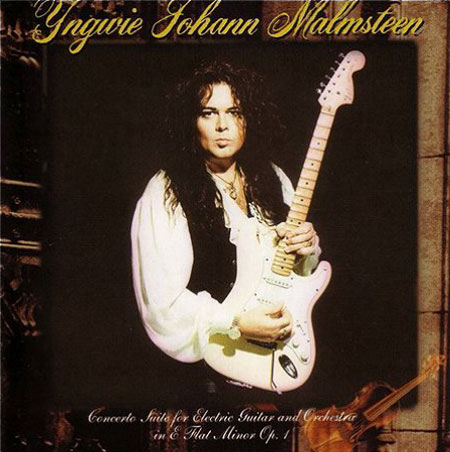 Yngwie Malmsteen : Millennium Concerto Suite It took me nearly nine months to complete the orchestration of Yngwie's 'Opus 1. My 307 page score for the Millennium Concerto Suite for Electric Guitar and Orchestra in E Flat Minor was originally written for 65 piece orchestra plus choir. But, due to union rules every musician in the orchestra was contracted to play at the recording session. So, my orchestration ended up being performed by a 90 piece orchestra with 40 piece choir! After the long, tedious process of transcribing more than an hour of Yngwie's ideas for the concerto, it was then time to begin the orchestration. First I wrote the entire score by hand, and then it was entered into my computer using a software program called Overture. I was then able to generate laser printed copies which were later leather-bound and used by the conductor during the recording sessions. Another interesting part of the whole process was creating a demo of my orchestration for Yngwie. Although he is a brilliant guitarist, Yngwie doesn't read music. So I couldn't present him with my score and say, 'what do you think?'. Instead, I had to create the 'Rosenthal Philharmonic' (using 7 Kurzweil synthesizers) and record a demo of the entire piece by playing every one of the parts. Then Yngwie overdubbed his guitar parts and was able to make comments and suggestions, which I later incorporated into the score. As part of my job as orchestrator, I also had to create all of the parts booklets for each of the individual musicians in the orchestra. When all was said and done, I ended up with more than 1500 pages of music! Just to proof-read the entire score and all the parts took me almost 2 months!! The Concerto was recorded in Prague by the Czech Philharmonic in June, 1997 and was released February 4th, 1998 in Japan. Because of the unique nature of this album, the record company (Pony Canyon) decided on two simultaneous releases: one targeted for the classical audience (released on the Canyon Classic label) and the other targeted for the typical Yngwie Malmsteen listener. I would like to personally thank Vora Vor for her dedicated assistance throughout this project. Unfortunately, the incomplete liner notes in the album did not properly credit everyone involved on this project.